Skater of the Year: Madars Apse 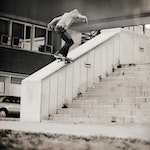 It’s not surprising that both the industry and the Kingpin readers voted for him. He filmed two of the best parts to come out in 2012 whilst attending university in London. I can’t think of any other skater who would be capable of doing that. It usually takes pros 3 years to put out full parts , and they are rarely of this caliber. Of  course that’s without having to attend lessons or write essays.I think he’s hands down number one european skater right now, and I’m glad everyone seems to think the same. The best thing about all this is that it’s only the beginning,  he’s got a long career ahead of him and I’m sure we’ll see tons of new footage from him very soon.

Here’s his part in the DC  Europe video.

Rookie of the Year: Tom Knox

2012 was obviously quite a busy year for him. He got a Sidewalk cover, a Grey cover and interview and smashed it on the Big Push as well as on every other trip he went on.

This isn’t from 2012, but I still think it’s relevant. It’s probably one of my favorite European parts ever. He seems to realise that skating good looking spots doesn’t mean you should get away with doing easier tricks.

Videographer of the Year: Pontus Alv

There’s not much to say for these two really. Pontus has been an inspiration on and off his board for years. When you’ve skated for Cliché or been on the same team as Scott Johnston Rob Welsh and Bobby Puleo (Mad Circle), you know how to pick a team. When you’ve created visual masterpieces such as “In search of the miraculous” , you know how to give your brand and it’s videos an appealing aesthetic. If you don’t believe me just re-watch this:

Slam City Skates is a legendary skate shop, there’s simply no denying it. This of course is thanks to everyone who works in the shop. The friendly dudes you’ll bump into at  Stockwell or Southbank who choose to stock and support the legit skater owned brands and help out the younger generation of skate rats.

Anyhow there’s a little bit more to it than that. This award is strongly linked to Videographer Of The Year, because if it weren’t for Henry Edwards-Wood’s dedication, there’s no denying  2012 would not have been such an important year for Slam. I can’t think of any other filmer who would have had the courage and patience to take on this mammoth task. City of Rats is a well produced overview of a scene that is extremely hard to document, so well done Henry!

He was getting quite close to Madars in the polls for Reader’s Choice European Skater of the year, and that’s undoubtably because of his section in Pretty Sweet. For obvious reasons we can’t post that part, but here’s a little edit that his fan club put together as a last call to get people to vote for him:

Soma may have taken it with this very controversial cover shot by Tura, but honestly, their covers are always sick. There  is a little story behind this one though, so if you are interested, head over to their site. The one Nikwen shot of Gonz wasn’t bad either…

Photographer of the Year: Marcel Veldman

If you have any doubts about why he deserves it, just pick up an copie of Fluff. This man’s a genius.

Web Edition of the Year: The DC Embassy

The guys that run this thing deserve an award just for spending so much time indoors while it’s so sunny outside in Barcelona!

Head over to their website for more information about the charity work they are doing in Costa Rica.

A casual ten down the MACBA three.

A casual ten down the MACBA three.