This interview took place about a year ago, in the spring of 2010. In the world of printed magazines things take time. Especially things that concern the internet. That portrait took about 10 years to go online. What are you doing in Finland?
We’re going to have a Blueprint premiere here, so I need to sort that out with Pete [Ruikka] from the distribution. Or actually that’s just a good excuse to spend a couple of weeks in Helsinki.

How was your UK tour with the video?
It was good, we had good weather the whole time. It was fun, had some premieres, had some beers, the whole team was there. 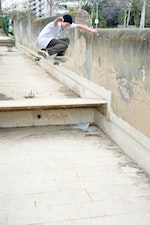 You got stuck in London after the trip because of the ash, right?
Yeah, but it wasn’t that bad at all. Lucky it was London. I was supposed to stay at Smithy’s for one night before going back to Barcelona, but I ended up staying for an extra week. Cheers for the couch Smithy!

This is pretty much your first full part, right?
Yeah. I mean, Marty has his PAL footage inside my part in the video, since he had all his NTSC footage in that promo that came out in February.

Anssi Paukkunen: Hang on, Marty has his footage in your part, or you have your footage in Marty’s part?
[laughing] No, it’s definitely my part with his stuff in there! It even says Tuukka featuring Marty in the beginning of it [laughing], so I’m claiming it’s my part for sure! And it only took me about 5 years to film it as well.

Anssi: And even so you needed a bit of help from Marty! Were you actually able to use the older stuff?
Well, there’s a couple things that are pretty old, from some trips and from London…

Are you like a foot shorter in some of it?
No nothing that radical. I haven’t actually changed that much it seems. Although there is some line in there where I’ve got a pretty gansta steeze, baggy trousers and that. It looks pretty funny.

Are you going to start working on the next video right away, or do you have some space to breathe now?
Well, we tried to go filming in London right after the tour. I mean, we didn’t get anything, of course, but we did try, so I guess we’ve started working on the next one. [laughing] They were saying something about HD and something, I’m not really sure. I just film whenever I go skate and there’s a filmer there, that’s what I’ve always done anyway. 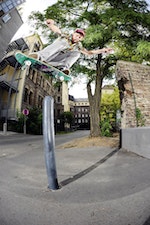 Who do you usually hang out with in Barcelona? Just whoever’s in town or crashing at Thomas Winkel’s place?
Well, fortunately I don’t live in that house any more. Or I didn’t really live there at any point, as in I didn’t have a room there, but I did spend quite a while in that house and there’s always people coming and going. It can get a bit hectic in the long run. You get all kinds of characters walking though that door. But no in general, I got my own little group of friends who live there, but of course I’m always stoked when my friends from Finland come by.

Does it ever get tiring though? I’m thinking of the lifestyle, where it’s always someone’s first or last night in town, partying like there’s no tomorrow?
Well I guess in a way, but then living there, you don’t really have to participate and go out every single night, you know. I know what you mean, and it can be like that when it’s my friends from back home visiting, but that doesn’t happen every day of course. And when it’s someone’s last night once again, you’re just like whatever, he’ll be back in a couple of weeks anyway! Speaking of houses, didn’t your upstairs neighbour set your door on fire?
Yeah, let’s see, it was around Christmas, Antton [Miettinen] was visiting, we had a few beers at ours before heading to the bars and coming back again in the early morning. That was our mistake. Antton was being a bit loud, and I admit I was too. Everyone had gone by about 6am. At 10 I wake up to someone banging on the door. I get up all dizzy to have a look and I see the bottom of the front door is in flames. I open the door and it’s our other neighbour, on his way to work and he’s like: “I thought I should wake you up and let you know you door’s on fire, so you don’t burn to death in there.” I go get bucket and put the fire out. Afterwards I called the cops and the fire brigade and it turned out that our upstairs neighbour hadn’t appreciated the noise too much and decided to torch our place.

And he lives above you?
Well, he’s moved out. But it goes to show how smart he was, setting fire to your downstairs neighbour’s place. Obviously, you’re going to burn your own flat down as well. http://mpora.com/videos/N2ctiZOul Just about to post today’s 10 tricks when the hard drive crashed. Cue ranting and swear words. Luckily for you we had this banging...

Daniel Øynes's section from Delta Charlie 3 to brighten up your day this Monday.