The new Blind video This Is Not A Test will see the light of the projector for the first time this weekend at Tampa Pro. It should be available on DVD and as a download on 5th of May. Below is an interview with Bill Weiss, the Blind Cameraman / editor, courtesy of Blind. 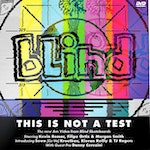 Unlike some of the videos that are coming out these days with months, even years of hype, THIS IS NOT A TEST seem to take a different approach with little to no hype until just recently, was this a conscious decision?

WEISS: This video was unplanned and literally created itself. When riders would come by I would show them footage I was getting here and there and some edits I had made and it got the team amped.

There’s been hype in the facebook world and Twitter. The dudes have been all over the place with New Sunday Fundays on TWS on every week, always having photos in the mags and being on The Berrics all the time. Now that the cat is out of the bag it will create even more hype and we have filmed some incredible behind the scenes pieces for the Berrics that are epic!

Seeing that Blind dropped The Blind Video in 2009, How long have the guys been filming for this video?

We have been unofficially been filming since The Blind Video was being duplicated for distribution. I never stop filming and the team always wants to skate.

What was the concept behind the video being mainly focused on the Ams?

Right when we finished The Blind Video I had been filming almost everyday with Filipe Ortiz and he was doing the most amazing shit. He was like “what are we going to do with this footage?” and I said “lets not worry about it and just keep filming” and he has been on a roll ever since. Morgan was also stock piling footage and then along came Romar on to the team and things just really started to roll. We never really had a set plan just wanted to keep filming. After awhile it seemed like a natural fit to do an AM video until Danny came into the picture and wanted to have a part so then I was like what do you call an AM video with a pro part? and “THIS IS NOT A TEST” was born.

Being you one of the masterminds behind the last couple Blind videos the team seems to have a great deal of fun making them and it shows through in the videos, how does THIS IS NOT A TEST measure up?

I would say that this has exceeded all my expectations. The guys have poured their hearts into filming and really put themselves to the test mentally and physically going through all the shit that goes into making a video. It’s fucking wild out there but the teams great sense of humor helps ease the pains of filming when things get too hectic. I am really proud of everyone and there is so much amazing skating and styles of skating in the video. I think people will really enjoy it. I have also had the great opportunity to work along side Socrates Leal as he is the head editor on this video. Soc has such a rich history in skateboard video making and brings his unique editing style and taste to the project. As Charlie Sheen would say “Winning”!

The video is premiering at the Skate Park of Tampa during the Tampa pro, how did that come about? Is there going to be any other premiers to let people know about?

We have been planning on celebrating the 21st anniversary of Blind on Friday at Tampa Pro with a Birthday party. At first it seemed like a shot in the dark to have the video ready to show at the party during Tampa Pro at clearly skateboardings most legit contest complimented by the best atmosphere but shit its going down like that and I could not be happier!

Who’s part in your opinion do you think might come out of left field and surprise the masses?

All the parts have come together incredibly and are true inspired works by the skaters themselves. As far as left field I would have to say Sewa from Holland as he is the newest addition to the team (as he was riding for Blind International for some time) and turned up in California through winning the ES game of Skate INTL with nothing more than the shirt on his back and nowhere to stay. After meeting him and skating with him the first day he seemed humble and eager and seemed like a nice enough kid. I knew he needed a place to stay so I invited him to stay with me and my family and the rest is history. We filmed everyday we could weather permitting during his 3 month stay and he filmed his entire part. It was tough and tiring but very inspirational to help him chase his dream of having a full part. He reminded of me of myself and many other foreigners coming out here with nothing just trying to make it happen. I would definitely say Aussie Kieran Reilley will be a crowd pleaser as he looks so good on a skateboard and the newest member on the squad Toronto’s TJ Rogers gets down for his.

When and where will the video be available to the public?

The video will be available to download and on DVD at around May 5th.

Check this clip of the the Matix squad’s latest addition, Alai rider Manolo Robles out of Almeria, Spain. Stylewise sort of a Dani Lebron v....

Etnies store opens up in Kingston Upon Thames

Skatehalle Berlin will hold another round of its illustrous series of invitational comps, the CLASH, on May 21st/22nd. Some sick riders have signed up already...

Check this clip of the the Matix squad’s latest addition, Alai rider Manolo Robles out of Almeria, Spain. Stylewise sort of a Dani Lebron v....

Etnies store opens up in Kingston Upon Thames

Skatehalle Berlin will hold another round of its illustrous series of invitational comps, the CLASH, on May 21st/22nd. Some sick riders have signed up already...

Baines and Benny take the Camp out of Sweden, but will that take Sweden out of the Camp?