Greek outfit Propaganda Rollin Co have launched their new site. Some bits of it are still under constructions, but go have a look at the team and product sections at least. And for a bit of Notis on video, click here. Apparently Notis has recovered well from his broken ankle he got right after shooting his Expand for us last February. Also, check out Bastien Marlin, their latest recruit from the south of France. 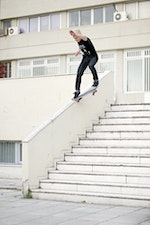 Notis on the Propaganda office balcony. They strip cars there. The whole neighbourhood is so full of cars you have to skate between 3 and 5 am. There’s no shower, but a really nice terrace. 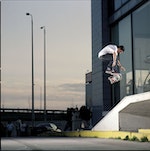 Skateable sculptures, photography, illustration, video, objects, installations, zines, mags and more in Fiskars, Finland to see us through the winter up north here.

Skateable sculptures, photography, illustration, video, objects, installations, zines, mags and more in Fiskars, Finland to see us through the winter up north here.

After a couple months of rumours and guessing, Willow's landed his feet on an Almost board

The Line With Sylvain Tognelli

Keys to the city!

The Line With Sylvain Tognelli