Antiz are almost three weeks deep on their OAF premiere spree. Samu sent in some iSnaps. I think we were supposed to talk about what was going on in the photos, but somehow ended up talking about the trip in general. So I don’t know exactly who does what in the ones with skating in there. Sounds like it’s been hard work and good times in equal measure though.

Have a look at what Samu’s got to say and show and find out more about the DVD release and download dates for OAF. Which is a sick video by the way. Dallas Rockvandamme and Hugo Liard were my personal favourites. Won’t go into detail to spoil it for everyone, but if this show is coming to your town and you’re thinking about attending, think no more. Attend.

How far into the tour are you?
We just passed the magical halfway mark.

How many days have you been on the road by now?
If I calculated right it’s our 18th day going now.

How many more to go?
I’m just checking flights at the moment to get out of this trip. But the tour will go on for another few weeks. Germany, Swiss and Italy still to come.

Do you have a premiere in a different city every night?
Well, it is a premiere tour…

The question between the lines here is, have you been boozing 18 days straight by now?
Yes

How’s the team’s morale doing? Still high spirits and high fives, or just guzzling spirits at this point?
It’s rising again because the crew changed a bit. Few had to leave and a few new sources of energy jumped on board. But the spirits still remain.

Do you get to skate at all, or is mostly premieres and parties?
Because of the tight schedule we haven’t been hitting the streets that much. If you don’t count the night missions. But we still skated most days. Mostly concrete parks so as a Finn it suits me well since we still don’t have too many of those at home.

You have a band with you, right?
For the first two weeks we super rad punk’n’roll band called Cortona with us. I think the best way to describe the band is to quote their opening line “We play rock’n Roll and we play it fast”. A few gigs were in bars and a few in skateparks. Skatig with live band is quite awesome. The “BUZZ” is high. Amazing guys. Fitted our Hoboness perfectly! Thanks guys! Speedrock band Ta Gueule will join us in Hannover. Don’t know much about them but looking forward to it!

I was kind of disappointed you weren’t at your Berlin premiere, I was hoping to witness the sickness myself..I love Julian, but he’s no match for a whole team AND a band.
Yeah, I wish I could have been there. But we had Pete, Julian and Polo to cover that one. We were busy on this weird tunnel after party in Paris. You know. Someone needed to take care of that one too.

Have you been camping out in parks most of the time? How’s that been treating everyone?
We have our tents with us but we only used them once so far. Other than that we have been floor surfing mostly. No complaining is the hobo rule n.1. To be honest, people have treated us so good. So thanks to all the distributors and other people who let us keep their neighbours angry.

We are supposed to go skate Cologne now! A real skate day and a premiere later. Soon as we get this tour done we are putting some effort to get the DVD out for those lucky people who couldn’t make it to the premieres. Around mid June. There will be a Scandi-premiere tour from Norway to Finland starting 20th of June.
After the last stop in Helsinki we will put a download link to ANTIZ site so the rest of the world can enjoy OAF too. In Good quality.
And the show goes on…. 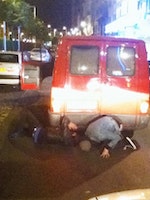 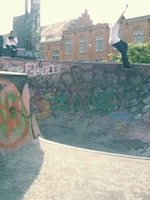 Behind the scenes feature on the new Nike Just Do It commercial with P-Rod, Omar Salazar and Theotis Beasley

Notis Aggelis is a sick dude from Greece that you really see too little of. Propaganda just released a board with his name on it...

Behind the scenes feature on the new Nike Just Do It commercial with P-Rod, Omar Salazar and Theotis Beasley

Notis Aggelis is a sick dude from Greece that you really see too little of. Propaganda just released a board with his name on it...

And the winner is...

Berlin up in flames the past weekend. Proof is in the footage.