For their second iteration of the Matchcourt High RX, adidas skateboarding and Pro team rider Na-kel Smith have put a luxury spin on the heritage silhouette – elevated, sophisticated, and inspired by imagination. On his fourth signature colorway with the brand, the Mathcourt High RX Na-kel is composed of Italian velvet and premium suede. The purple colorway calls back to Hollywood royalty and musical icons, with a regal flair and intricate detailing inspired by Na-kel himself.

Founded in the iconic Matchcourt franchise, which pulls inspiration from adidas’ heritage in court-style silhouettes, the Matchcourt High RX Na-kel’s adornments are bolstered by the clean, functional design, providing support, stability, and optimum feel. A bold departure from anything conventional, Smith continues to push the envelope with each new signature colorway release. As an extension of his imprint on the three-stripes brand, the Matchcourt High RX Na-kel is the rider’s most stylish offering to date. 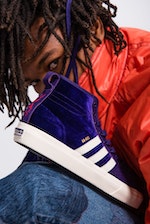 The Matchcourt High RX Na-kel will be available at select retailers and on adidas.com/skateboarding starting December 15.

Vans x Independent Truck Co. join forces for the latest installment of their collaboration series. Take a look at the new pieces...

We’ve teamed up with photography giant Canon to give away two amazing prize bundles - simply tag your skate photos #CanonFirsts and post them on...

Have a gander at the new shoe and check a fresh minute of Jake Anderson footage.

Both the Versa Hoodie and Versa QZP DX provide the opportunity to feel "comfortable and effortless, without sacrificing style."