One Stop is a unique, single shot video that showcases the consistency of Silvas’ talent and the flowing nature of pure, unfiltered skateboarding. Filmed at night in the heart of the Koreatown neighborhood of Los Angeles in real time over a seven-block stretch, One Stop is a five-minute, one-take sequence of Silvas putting down one of the most technical and extensive lines that skateboarding has ever seen.

In tandem with the One Stop video release, adidas Skateboarding unveils specialty colorways of the City Cup, a brand new silhouette infusing three-stripes footsport heritage and modern aesthetics to create an entirely new skate shoe, streamlined and true to the classics. Debuting at specialty retailers in a suede upper complemented by a classic gum rubber outsole, the City Cup is a heavy-duty built-to-skate shoe, yet slimmed down and reinforced for durability. 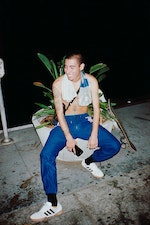 Taking inspiration from iconic adidas models from the ‘90s like the Montreal and Powerphase, the City Cup combines the heritage and look of classic training shoes and infuses new lines and technology to meet the needs of a modern-day performance skate shoe. A vision under Senior Footwear Designer Scott Johnston, the all-new shoe features a double cup mid-sole, which offers optimal support and added stability, while retaining all the feel and flexibility needed for precision and control.

The shoe’s interior are constructed with a breathable mesh lining, while the exterior is finished with a vulcanized rubber heel-counter emblazoned with a linear trefoil heel logo. The gum rubber outsole sports a textured herringbone pattern that wraps onto the sidewalls for maximum grip, front to back. Heritage, aesthetics, and performance manifest and coalesce in the City Cup, making it a truly unique shoe, primed to become a modern staple.

Follow Donovon Piscopo, Kevin Terpening, Hugo Boserup and John Fitzgerald from Portland to the Oregon Coast and back.

Real innovation from Vans with the Versa Hoodie DX

Hard-wearing, odour-resistant - what more do you want?