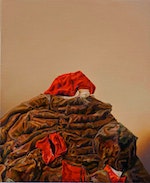 FORMERLY
One man show by Nick Jensen
at TWELVE AROUND ONE | 33a Shacklewell Street, London E2 7EG

Twelve Around One is pleased to present the first solo exhibition by artist and curator Nick Jensen.

The works in this exhibition can as easily be viewed in terms of the space of improvisation, as well as more literally as a reworking, translation and mediation of past artworks and their material propositions. Within the titles to the works lie cues, which hint at the various contexts from where the work springs, as well as reflecting Jensen’s specific approach to titles themselves. Jensen’s paintings which take as their starting point historic portraits which he recreates removing the painting’s subject, resulting in the sitters clothing falling into a heap at the base of the image or slipping from the frame entirely, as if the painting’s subject had quite literally stepped out of them. To render it in this way is to strip the original work of it’s purpose and intention, the absent figure is given it’s dimension by the comparison established with the original, which is achieved through the otherwise faithful replication of all other elements within the work, creating an awkward uneasy tension with the resulting clear expanse of wall, the voided space, now visible behind the position once occupied by the sitter which equally exposes life’s relative frailty in relation to the duration of works of art. The process also has the effect of transforming the work from it’s original state as a figurative piece into an oblique abstract echo of its former self.

Jensen achieves this by distinguishing the parts and elements of the paintings he references from themselves. Aspects of the paintings he references are drawn out and extended into the gallery as sculptures, exceeding the frame, and exceeding the space of their prior encounter, where seeing behind the mask is a form of seeing the space within the mask.

There is a parity established in this formal arrangement between the reductive impression of the reworked originals, whose allusion to subect promts the illusion of object, and the extraction of form which serves to notify its presense.

Between the various sets of paintings and sculptures, and hung throughout the space, are sets of marble pegs. Sculptural forms only visible in the absense of anything hanging on them. Their redundant gesture hold the potential for support, as both a prop for object or subject, for canvas and stretcher, or for the sunken mass of the absent sitters’ clothing.

Nixon and Plan B launch a collaboration series of boards and wheels to match the mobile speakers.

Slam City Skates and Converse have teamed up to drop a good old shoe colab and there is an exhibition featuring the work of Lev...

The long road to victory has led 12 shop teams to compete in Münster this weekend, Oct 13.-14.

Nixon and Plan B launch a collaboration series of boards and wheels to match the mobile speakers.

Slam City Skates and Converse have teamed up to drop a good old shoe colab and there is an exhibition featuring the work of Lev...

The long road to victory has led 12 shop teams to compete in Münster this weekend, Oct 13.-14.

Formerly: Jensen On His Show

Nick Jensen's solo show Formerly is on until this Sunday, 14.11. Check some snaps and read about his thoughts on the thing.

Formerly: Jensen On His Show

http://vimeo.com/50759742 A few days in Los Angeles with Rob Smith with guest appearances from Patrick Melcher and Richie Jackson. Rob, Richie and Pat all have parts in...