I’ve seen Karsten around for the last 10 years, he started skating around the time when Oslo’s biggest skatepark was suddenly built in his neighborhood of Bekkestua. At first I thought he was just going to turn in to a skatepark rat, but I was wrong, he’s decently one of the raddest street skaters out there at the moment, with full-on power and speed. The last time I meet him was randomly in Paris this summer, whilst he was on a Lakai tour and I noticed that he was enjoying skating with bigger confidence than before, I realised then that he had stepped up he’s game to the next level. – Gabriel Engelke

Hey Karsten, what have you been up to since Berlin?

Yo Sem! Everything is good!  Just been skating a lot and hanging out with friends!  Normal stuff I guess!

How’s your elbow by the way? I remember it swelled like a balloon after that slam on the rail.

My elbow is back to normal after the slam. The thing was that I had an infection in my elbow two weeks before the trip to berlin.

Ah yeah, I remember now about the infection.

Yep. So it was really vulnerable and then when  I took that slam straight to my elbow it just swelled up crazy!

Do you actually live in Norway? Where exactly?

Yeah I live in Oslo, the capital of Norway!

Isn’t it too cold to skate there now?

Do you have good indoor parks?

We have two small indoor skate parks in Oslo and they are so crowded all the time! We really need a new one. 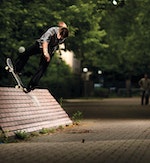 And how’s skating and living in Oslo?

My city is pretty mellow! It’s not too big not too small, and it’s really good for street skating during the summer. I usually skate with a few friends I live with.

Yeah, we’re four friends sharing a flat in the east part of town. And we’re all skaters, so it’s perfect.

During the spring and summer I try and spend as much time as possible in Oslo ‘cause it’s so good, but when fall and winter come I try to travel. Like right now I’m in Long Beach with Nassim, skating and enjoying life!

True that, I’m sorry I called you earlier today, I didn’t realise it was so early over there. So, How is Long Beach going?

Ha ha, no problem man! I had to get up anyway. I’m going to stay here for one month! 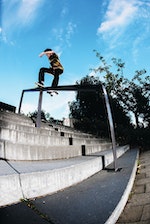 Is it your first time there?

It’s not my first time. I have a couple of friends over here so I usually go a couple of times a year. This would be my 6th time I think.

Alright, now I understand why your English is so good. Is it a personal skate trip or does Element want you to be there for some reason?

It’s both. I’m coming here to film for the upcoming Element Europe video and to chill and escape the Norwegian Winter.

And how’s the US this time then?

Well when I arrived at the airport and had to go through the border control. The lady didn’t like me, or something, so I had to go through another control and wait for one and a half hours before they decided that I wasn’t a terrorist and let me go!

hold it down interview