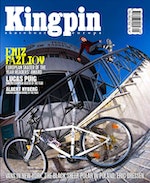 March issue is out and it’s dedicated to the best skating Europe had to offer in 2011. Winners and nominees for various prices in the Bright European Skateboard Awards are featured in the issue. Eniz, Lucas and Abbe all get interviewed. Thought you were done with Pontus after last month’s overload? Think again, he’s back this month. On top of the awards hullabaloo, there’s a thing about Pontus’s board company Polar in Poland and an article on Vans in New York. Eric Dressen answers Questions. Just one issue shy of 100, we decided to kick off a couple of new bits as well in the front of the mag to make easier to dip in and out of. In Quick 5 we’ll be asking three skaters each month the same set of questions about their current top of the list and bottom of the barrel things to do. My Phone is a silly feature for the terrifyingly shallow digital age. Arguable the most tech savvy professional skateboarder out there, Colin Kennedy, kicks off the new monthly feature and shares his most recent phone screen grabs and snaps, including tweets and chats and the like. You get the picture – but only if you buy the magazine though. Colin is really quite good at everything he does, be it skating, team managing, sound compressing or filtering the noise out of a rush-hour information motor way.