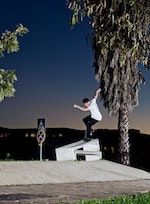 This spot is probably one of the finest examples of a street hip you will come across, minus the knackered floor and zebra crossing just before the take off.

I had to come back to this one right before getting my head down for the 4am flight as I blew it during the first session here, it got dark and I got over it. Alas, the trick gone done during round 2 and DVL made it look absolutely fantastic. Cheers Davy. Nice light as well.

Admittedly I snaked this one from Vaughan Jones as he was too pussy to land it on the National trip to Lisbon last year. But the ollie was the warm up for the 180 and so I guess this was the best out of the two. Either way, thanks again Davy for being fantastic.

The ride out of this smith was treacherous, as you can probably see here. The curb is at an awkward angle meaning you need to ride out at near enough 90 degrees to avoid eating certain shit. Victor is a French savage though so tackling this was no real issue. The real issue actually came in the form of some old guy who stood and watched the whole session having called the police early on but not having asked us to leave. The police turned up and informed us that the guy had called them to chuck us out, which lead Victor to lose his rag and stand shouting at the old guy “who iz zis dick?”.

The police, who genuinely couldn’t give a fuck, were then forced to try and act professional whilst clearly wanting to piss themselves laughing. 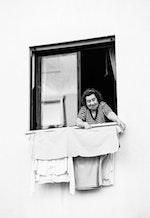 This spot is over the water from Lisbon in the nearby town/skate haven of Almada. The plaza that this stack of bricks resides in is a staple of any passing trip, though Sam found a new line at a heavily sessioned spot and thrusted this wallie Japan grab right out the top of this sturdy old wall. I think even Alex Moul would stamp some approval on this one. 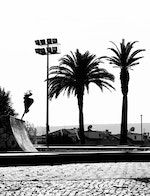 Aside from having stinking athletes foot and being steaming drunk all day every day, the skateboard artist known as Daaaaaaaanvanderlinden managed to kill it on and off his skateboard from pretty much the get go. But that’s second nature to the little shit so no surprises there.

He did this wonderful handlplant, whilst in between tries quizzing me about Swindon. What a lovely photo. 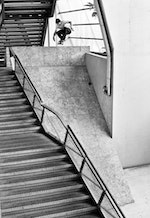 This idea was doomed from the get go, nightmare security, passing pedestrians, rush hour the list goes on. Luckily, reminiscent to Hercules, Victor is a legend and made it happen quick style. But more impressively as he rode away he splatted in to the escalator situated directly at the bottom of the bank. He managed to sneak in a few more successful attempts before being ejected by impressed, but pissed off security… Tres bien Garlic! 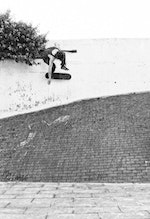 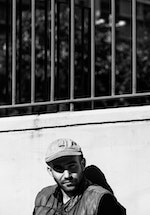 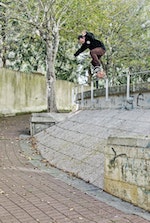 This spot is a proper rugged little number, and as such, Ross was the only person who could be bothered to skate it. No run up, narrow run out, dog shit all over the place… it’s safe to say that enthusiasm wasn’t really running at a high for this one.

But being the London based Irish beast that he is, Mr McGouran battled through the elements and stuck this 5050 transfer, popping into the bank with no trouble whatsoever. Classic Ross… 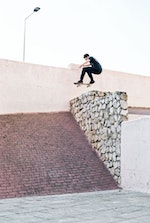 I’d been to this spot on a trip to Lisbon last year and spied this line just as we were getting served ‘das boot’ by some disgruntled residents. This time around we had the pleasure of dealing with some more angry locals, but we also had a backbench of OAPs approving of our antics that were telling us to ignore the others and carry on with the session. So we did. And I managed to get away with leaping over the rocks between the banks. 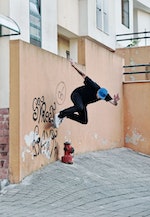 Nestor Suki, one of our waffle brethren from Greece, had the misfortune of nearly snapping his neck in two trying to wallie a dome just before this wallride went down. As we left the dome, the bossman himself Danny-fucking-Wainwright spotted this little gem, so pulled the convoy over in order to tackle this hydrant dodging wallride. It’s the most enthusiastic I’ve seen Danny about a trick in a very long time. (laughs).

As Danny was getting his head around his trick, a load of old boys from a nearby bar came out to spectate and proceeded to feed Danny wine in between attempts. The try before the make, Danny slammed his hip into the side of a Honda Jazz, giving him the perfect excuse to neck another glass of red vino. He made it next try. Tres mas! 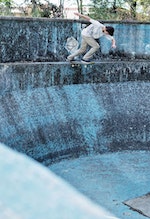 This spot was located round the back of an abandoned mansion. Once upon a time I’m sure some stars of a Lisbon soap opera once inhabited the place, but alas those days have passed and now the grounds are occupied by a colourful cast of squatters.

Luckily the squatters have no real use for this knackered swimming pool, so we snuck around the back of the place, Paco unleashed the drone and Daan powered through some insanley slippery surfaces in order to bring you this stunning back tail. Dot dot dot steeeeeeez…

This skatepark is well old. It goes back at least as far as 2008. Maybe even older. In fact, local legend has it that it might even be older than Danny Wainwright himself. I’m not sure about that though as Danny is getting on a bit these days.

Anyway, the park was 25 minutes south of Almada, mosquito infested and covered in those European helicopter leaves that love stopping you dead in your tracks at any given opportunity. Luckily Paco put his drone to alternative use as a leaf blower and cleared the park of helicopters in no time, whilst the rest of us took shelter in the van avoiding those bastard mosquitos. Sam blasted this bowl to bowl crossbone, then me, Rich Smith and Danny went and dropped some serious coin in a local desert shop. 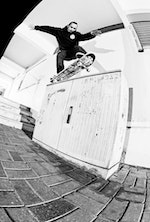 This photo is so white that I’m surprised Stephen Fry isn’t lurking around in the bottom right hand corner trying to tell Ross some uber-interesting facts midway through his trick. As it stands, Stephen Fry wasn’t on hand so we’ll just have to make do with Ross and his cute little red face balancing through a hefty gap to backside 5-0, complete with everybody’s favourite landing surface – ‘uphill ride out’.

The local gully badmen were also hyped, mostly on the weed purchases.

Daan – ollie over to window-ride.

I was at this same spot last winter when skateboarding legend Neil Smith ollied over the same bump driveway to grind down a post that had conveniently been driven into. Following the landing of such an epic stunt, the local authorities removed the pole because something of that magnitude can never be topped.

Daaaaaaaaaan isn’t one to abide by these rules and so ollied over the bump to ride on the sodding window instead. I’ve no idea how he did this, the window he was landing on was so narrow. But Daan’s a freak so I’m not even going to bother start looking for reasoning here. It’s just plain insane.