Where to start? I guess it depends on who is writing. Some people would start with one era or another in the city. I will start my story at the end of the eighties.

You could say that’s where Madrid skateboarding exploded, like many other European cities, right when the third video of Bones Brigade, “Animal Chin”, came out, circa ‘87.

That video was mostly transitions, with some exceptions like Tommy Guerrero. That’s the reason most of the people in Madrid skated transitions in Parque Sindical (RIP), now turned into Paddle courts. Those banks and bowls were skated by Hosoi, Caballero, Hawk, Gonzales, Mountain and endless legends of skateboarding, which made more and more people skate in the capital, myself included.

Around 1988 some of us started to skate what would become the most skated and famous Spanish plaza in the nineties: Plaza de Colón. This started a new era in Madrid’s street skating. Big names came out from that place, like Dani Lebrón, Jesús and Alfonso Fernández, Ruben García, and many others. The people who skated Colón for two decades witnessed at least four generations of different skateboarders, form from 1990 to 2010. Sadly, nobody skates that place anymore since the politicians of the city decided to change key parts of the ground, making it mostly unskateable, murdering one of the most important icons of skateboarding in the city and in Spain.

Nowadays, people gather up in Tetuán’s skate plaza, north of the city, and sometimes I think politicians are finally getting what they were looking for, slowly cleaning the streets from skateboarders, locking them in a skatepark. It’s obviously not the same as Colón, but at least it’s got a bit of everything and it’s well designed, built with good materials and ground, which makes it have more and more locals every day. It’s definitely a must-skate place if you visit the city.

Changing subject a bit, I think the city is getting a bit trendier lately. In these last few years, more and more big brands have chosen the city to skate. In these last two years we have seen teams from Nike SB, Adidas, DC, Supra, Bones and Gravis, and no wonder, because the city is full of spots and nightlife. It’s definitely worth the visit; museums if you are into those things, good gastronomy with the famous tapas in the centre, and a wide range of bars and pubs open every night.

So here you have a few suggestions from someone who has lived in the city for more than 25 years.

There are no problems within locals whatsoever. They all get along well and you don’t have silly fights like you can find in other Spanish cities; so no matter what group you go with, you will always be welcome to skate with whoever you find in other places of the city. People are open and friendly, willing to help you in anything they can. They don’t hide spots from foreigners either; you will have no problem in getting directions to any spot you want to skate. No competition in that matter.

There are a few in the whole province. In the capital, as I mentioned earlier, you have Tetuán’s skate plaza, which has become the main spot people want to visit – well built and a lot of variety. If you prefer transitions, you better go by Legazpi skatepark, Móstoles skatepark or “Nepal” skatepark. The locals call the latter that, and it’s placed in Alcobendas, a city 20 Km. north of Madrid. They call it ‘Nepal’ because it’s very close to the mountains in the centre of the Peninsula, and temperatures get really low during the winter. The most radical ramps you will find around… if you can skate Alcobendas, you can skate any transition.

We’ve never had many problems skating the city. Unfortunately that’s not going to last long: in 2014 there’s a new law coming that will give tickets up to 750€ if you skate in the streets. Most of you have already visited Barcelona, so it’s going to be quite similar.

The centre is always a good option; you have all you need close by. There are hostels with rates like 15€/night. If you can, find a cheap one close by Plaza de Congresos, it’s a nice spot with ledges, so you will have a place to warm up after the first coffee of the day. 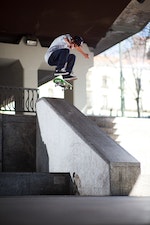 Please, no Mcdonalds or Burger Kings. That’s an insult to Madrid’s gastronomic culture where you can eat nicely at every bar you find – and there are like four on every street no matter where you are in the city. Don’t hesitate to try new stuff like Madrid’s Stew, Calamari sandwiches or any of the thousands of rations and tapas you have to choose from. You won’t regret it.

There are thousands, but have in mind you are going to need a guide and a car to get to half of them. Then, don’t expect to find perfect spots because you won’t find many in the whole city. You will indeed find rough ground and cracks in most of them. But that makes it just more interesting to conquer right? If you go up from Colón through Castellana, you will find one of the most iconic spots in the city, Puente de Juan Bravo. It’s placed under a bridge, hence the name. You have a good set of stairs, a long ledge and 4 hubbas. Another must-see place is Plaza de Hortaleza. That’s not the actual name of the place, but all the skaters call it like that because it’s in the neighbourhood of Hortaleza. Super slippery ledges, stairs and smooth ground make this plaza north of the city almost perfect. A group of locals have placed some flat rails and a euro-gap in a corner. No pedestrians pass by; you will only see skateboarders and a random dog from time to time. It’s the classic DIY but with more options.

If you don’t have a car you might get lost in the city, although you can always use the metro instead. It’s fast and well connected. If you followed my advice getting a bed in the centre, skateboarding is the best vehicle in that area. That will make you find possible hidden spots on the way.

Things have changed a lot in Madrid in the past 25 years, but we never had so many people skating as we have now, all doing stuff to feed the local scene and make it bigger. Filmers, photographers, anonymous skateboarders and skate shops are constantly organising events to promote skateboarding in Madrid. If you want to see a good inspiring video form Madrid, check Dopados, Welcome Video or Weird Dimension on YouTube, or on Kingpin’s website to see the new exclusive edit from Félix Bollain.