Until a little while ago we used to only see footage of hard, tech tricks from you and lately there’s been some more funny stuff as well, some no complys and lip tricks here and there. Is this a conscious choice? Or are you being influenced by other skaters?

Yeah, I’ve noticed that too. The thing is I’ve always skated a lot of transition, people just never saw me do it. Of course, skating with other people makes you skate different spots and learn different tricks as well.

You ended up skating for Almost. What made you make that choice? Were there a lot of other options?

There were a couple of other options but I had met Lewis (Marnell) six months before and he said I should come and skate for Almost. We spent another month and a half in the States together afterwards, he’d arranged everything for us that time, thanks again, Lewis. I didn’t know who to skate for because everyone was saying something else and then I thought, “Who do I want to skate for?” Almost!

Skating with the Almost guys probably gets you into skating all kinds of spots. Have you skated trees and rocks with Daewon already? A waxed manny pad with Rodney Mullen?

I haven’t had the chance to skate with Rodney yet and when I’m out with Daewon we usually go to a skatepark or a mini ramp. The spots he skates aren’t easy to get tricks on.

I’m sure you could muster up something. Are you taking suggestions on mini ramp tricks to do? I have a couple in mind that I’ve never seen anyone do.

Yes, lots of suggestions, I can’t really think of many things to do in a mini ramp.

My bag of tricks is pretty limited in a mini ramp, though, so don’t expect too much.

The presidential elections just ended over there. What was that like?

Obama won last night, I haven’t left the house yet.

Did you play Tony Hawk’s Pro Skater when you were younger? What ‘s the longest combo you’ve ever done?

Yeah, I always used to play that whenever it rained. I have no idea what my longest combo was, though. Maybe around ten minutes with the perfect cheat.

And in real life skating?

No idea. I’ve done a lot of dumb combos but I can’t really think of one.

You’ve always been a big Paul Rodriguez fan. Is that still the case? More so than before or less?

Yeah, I’ve always been a P-Rod fan and I guess I always will be. One of the best skaters in my eyes, not just his skating but everything surrounding it as well. I’ve got a lot of respect for the fact that he’s still as down to earth as he is. Impressive.

Are you still starstruck when you’re around him?

Not because of who he is anymore, but I’m definitely still impressed by his skating every time. I skate with him like I skate with anybody else, though.

Do you think he has lost a bit in terms of style compared to when he was younger, like in In Bloom?

Skating changes and styles change too. I don’t think it’s a conscious thing, though. If there’s anyone that doesn’t need to think about that it’s Paul. I wouldn’t say he has lost in style, he just changed.

What do you miss from Belgium when you’re in the U.S. ? And the other way around?

The good food in Belgium. Year-round good weather in L.A. .

What’s the food you miss most? And what do you eat over there?

I miss everything my mom makes. When I’m in the States I eat pizza, hamburgers, French toast, Mexican food and a lot more unhealthy stuff. 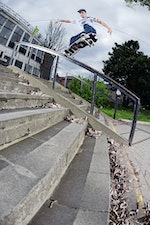