This May I spent three weeks in Budapest, Hungary skating with the Rios Crew and exploring the city. Most days we went to the DIY and then headed into the hills. But one evening on a bus ride we noticed a brand new square outside a train station. We decided to come back the next day, and discovered a new style of skate stopper: the snail.

Snail skate stoppers are a bit like the doughy security guard who kicks you out in a reasonable manner: “sorry lads, but I’ll get it in the neck if these ledges are scratched up.” He doesn’t really want to be there at 9 in the evening; he’d rather be snuggled up with his wife and the paper. It is hard to refuse this kind of harmless instruction, you don’t want to feel like you’re being the idiot. So you take a few pictures, leave, and vow to come back another time.

We discovered the new style of skate stopper at Széll Kálmán tér in a number of forms. There were metal snails arranged on one ledge to prevent people skating over it; a metal wallet; a metal umbrella; and a metal skateboard. The snails, admittedly, are cute. At least they are trying to make prohibitive architecture look less draconian. You can imagine the myriad Instagram posts that will emanate from this very spot. The wallet too is funny – how many people will walk past and wonder if someone has lost their wallet, or even try to pick it up? But we felt that the skateboard was a step too far. Clearly, we thought, the designers are happy to appropriate the fleeky iconography of skateboarding, but with the proviso that skaters themselves are not welcome in the square

“Barnabás Szakács: Personally, I don’t mind skaters and I disagree with the prohibition”

Many people claim to see both sides of the debate over prohibitive architecture. Surely, they say, if the land is privately owned then the use of skate stoppers is justified? But this on-the-fence position becomes untenable as increasing amounts of our public space becomes privately owned. What’s more, Ocean Howell has described how prohibitive architecture controls the type of person allowed in urban, commercialized spaces – an unwanted ‘type’ of person is one who is unwilling or unable to spend hard cash.

Yet after speaking to Barnabás Szakács, the designer of the square, I found out that our initial vexation was misplaced. He turned out to be a very reasonable guy, with a difficult brief to build the square so that skateboarders are unable to damage the ledges.

“Personally, I don’t mind skaters and I disagree with the prohibition, but I was sure about one thing: I would not like to use the common, little metal balls as obstacles on the square. They are aggressive and they generate negative associations. We wanted to come up with a solution that does not suggest prohibition, and turns down skaters more politely. Lifted and inclined retaining walls serve the same purpose, and we tried to position the street furniture and trees in a way that impedes or at least makes running up difficult.”

It is encouraging to find that it is not only skaters who perceive the metal knobs to be ugly. It also seems reasonable for them to offer us a polite notice, rather than the cold deterrent of security and monotonous rows of metal.

The harmless looking snails and strategically placed trees open up our existing definition of the skate stopper, and it seems that designers are moving away from the metal knob. Rows of metal knobs look awful to anyone, and it is clear even to the uninitiated passer-by that something has been outlawed. But when the same passer-by sees a seemingly arbitrary arrangement of snails on a block, they may not realize their primary function. The dual functionality of the snail, as both skate stopper and artistic adornment, is only clear to skateboarders and designers, who understand that the block has the potential for play.

There may also be further uses for the snails. Although I completely disagree with the use of anti-homeless spikes to keep rough sleepers away from office entrances and windows, the snails would look a lot better than concrete spikes. Imagine how they might deploy hordes of metal creatures in front of offices to prevent the homeless from getting a comfortable sleep.

Although the metal objects are prohibitive, as a designer Barnabás is keen for people to interact with his work: “It was intentional to create small objects that don’t belong to the image of the square, but if they are noticed, they will then appear on people’s mental maps. We wanted the square to hold surprises so if someone changes trains here regularly, they can discover something new each time. It is as though there is a second, hidden layer of the square.” 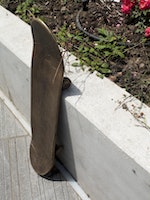 Skateboarding too is a hidden layer here in the square, and it seems that the initial brief has been addressed in a way that keeps everyone happy. “I don’t know too much about skateboarding. I spoke to a few guys but I didn’t want to follow their instructions entirely. If I wanted to stop skateboarding completely I would have put a lot more barriers. I think these sculpture should work like a ‘no entry’ sign for traffic. You can enter if you shit on rules but we want to ask you politely not to do so.”

Perhaps this is the future of prohibitive architecture – polite notices that are aesthetically pleasing, instead of unattractive knobs that completely rule out skateboarding. Whilst we approach the square through the lens of skateboarding, we miss out on the fact that the designer’s work has not outlawed free running, breaking, graffiti, or any other urban activity. They haven’t even completely ruled out skateboarding. We all react better to the polite security guard than the raving one, and likewise, a polite notice will work better than aggressive deterrents. Look forward to metal creatures on a ledge near you.

A good bag of tricks mixed with a raw style ensured Arturo Alonso got the last part for the BD Skate Co. video, Skateboarding Saved...

The Kyle Walker interview: pan-tones of the year, the hard part of acting all pissed and potential retirement in Europe.

A round-up of everything that went down at this weekend's Nike SB Berlin Open.

For part 2 we’ve sat down a few of Lloyd’s newer generation to hear about how the spot remains relevant to this day, we also...