Master lensman, tall man, and all round good guy Leo Sharp recently spent some time in Paris with Leo Valls, they got talking about Leo’s work in Bordeaux regarding making the city ‘skate friendly’. Intrigued by this Leo headed off to Bordeaux to spend some time with Leo, shoot the photos you’ll see below, and allowed us to find out a bit more about skateurbanism and what all this means.

First of all, could you please explain the term ‘skateurbanism’?

Skaturbanism explores skateboarding as an integrated part of public space, in a way that cities and skaters can mutually benefit.

What’s the deal with skating in Bordeaux? Do you get kicked out of spots often?

We used to! I mean, of course you still get kicked out by people when skating right under their window, but the cops don’t really kick us out anymore or give us tickets like they used to a couple years ago. Unless you really screw up I guess!

You arranged for some of the plazas that had previously been a bust to welcome skateboarding during certain times. How did this work?

It’s been a long process. To provide some context, skateboarding has been very popular in Bordeaux for a long time now. You can tell how many people skate or push just by walking around the city. We have a long skate history, several skate shops, companies, pros, skate tourism… Even the national skateboard mag, Sugar, is based in Bordeaux. This probably comes from the fact that surfing has been very popular in the region for decades – beach towns such as Lacanau and Hossegor are close by. Also, the streets and sidewalks in Bordeaux are super smooth, and around 15 years ago, the city centre was rebuilt which created many sick spots. Bordeaux is a wealthy city with quite a bourgeois mentality, and skateboarding became a problem for some of the residents, mostly because of the noise, amplified by the layout of the city and its narrow streets.

“I haven’t heard of anyone getting ticketed since we set up this deal with the city council.”

So, yeah, the city didn’t know how to respond to the rise in popularity of skateboarding whilst receiving complaints from residents at the same time. They started to ban skating at some of the downtown plazas, adding ‘no skateboarding’ signs to a few of the most popular spots. A new police station opened in the centre and the cops would chase us and give us €70 tickets. Kids ended up having to go to court… it was bad, and it was only getting worse. Of course, we would keep skating these forbidden spots – mostly at night to avoid the city cops – which in turn became even more of a problem for the residents.

That’s when I was invited by a local news station to speak on live television about the local skateboard industry; I decided to go and use the platform to denounce how the city was treating skaters in the streets. A few days later I was invited to the first in a long line of meetings with the city council. We set up a team of local skaters, activists and with the helo of a local assocation, manged to convince the city council, as well as the disgruntled residents, to share some of the plazas, allowing us to skate them during certain days and times – we saw this as being better for everyone.

The vast majority of the local skaters were stoked; kids respected the deal and can now meet up and skate entire afternoons at their favourite plazas without having to be on the lookout for cops, while still being able to skate most of the rest of the city anytime without problems. It’s been way more chill since then. I haven’t heard of anyone getting ticketed since we set up this deal with the city council.

What arguments have you found to be convincing when speaking to councillors? I imagine it must be difficult for them to understand all the nuances of skateboarding and its relationship with space.

I would say the first thing to do when speaking to officials is to try and put yourself in their shoes. They have nothing to do with skateboarding in the first place so it’s up to you to explain what it is, why it belongs in the streets, and how it can be beneficial to the city – as well as for them as politicians. It’s difficult for someone outside of the skateboarding world to really grasp the complexity of it: it can be a sport, an art, a culture, a way of transportation but also a way of creating social interactions. We had to meet with all kinds of different departments at the city, from sports to culture to security during this process.

“I ended up debating skateboarding and space with Alain Juppé, the mayor of Bordeaux and ex-prime minister of France.”

The cultural aspect really is what brought it home for us. Not long after our first meetings with the councillors we set up an exhibition at the local contemporary art museum. I must thank Arc en Reve, a Bordeaux-based architecture centre that’s been around for 30 years, they really wanted to support local skateboarding. The exhibition showcased the history of local skateboarding, the variety of the local scene and most importantly – showing how healthy skateboarding actually is for a modern city. It became the most attended event to date for the architecture centre! Janne Saario, Raphael Zarka, Claude Queyrel, Ocean Howell and myself spoke about skateboarding at a conference to which the council officials were invited.

At a second conference, I ended up debating about skateboarding and its relationship with space with Alain Juppé, the mayor of Bordeaux and ex-prime minister of France. He understood that trying to ban skateboarding from the streets would never work and wasn’t a healthy solution, noted that a compromise with the skate community had to be agreed upon in regards to the plazas and talked about how we need to integrate skateboarding into the urban landscape of the city starting immediately.

“If cities start thinking positively about skateboarding instead of prohibiting it, they can actually benefit from it”

It’s still a work in progress, but I can tell you a bit about it. With skateboarding now being allowed at some of the previously forbidden spots a second aspect of how we could push and integrate skateboarding into the city for the long term came to life. If cities start thinking positively about skateboarding instead of prohibiting it when building public spaces, they can actually benefit from it. We’ve been explaining to the councillors that if we develop skate friendly public spaces instead of giving tickets to kids or putting skate-stoppers everywhere, it would positively impact the city, bringing life to these areas, and naturally help naturalise the practice of skateboarding throughout Bordeaux.

We identified a place, one of the last dormant spaces in the city centre, a place with no neighbours in close proximity. We’ve been pushing the idea of building a plaza there calibrated towards skateboarding, and that would be open to everyone. Not a skatepark looking spot at all, more of an urban space where anyone can come and chill, play and skate, a place that would withstand skateboarding and time. The city validated this idea, and we’ve also been working with them on integrating skateboarding in some other upcoming urban projects in town.

How do the general public react to skateboarding in Bordeaux?

Most people use the city as a way to go from A to B. We use the city to play. I think being able to play and express yourself in public spaces is very important, especially for kids, and very relevant nowadays, since cities are more and more built to feed consumerism. Most downtown cities tend to transform into shopping malls, and with this often goes the freedom of playing or participating in free activities in public. On the other hand, we need to understand as skateboarders how non-skaters can perceive what we do negatively, how it can be seen as aggressive by some, and that we are not alone when skating in a downtown city. Trying to put things in perspective and understanding how other people perceive skateboarding is key to finding solutions that work for everyone.

How does public space work in Bordeaux? In London, for example, a lot of the ‘public space’ is not public at all and is in fact owned by private companies meaning they can remove anyone they deem undesirable.

Most of public spaces in Bordeaux are owned by the city. There are a few places owned by the government or by private companies, such as banks, but security guards are quite rare here. It’s mostly the city cops that care about skateboarding, depending on the city’s skate policy.

Can you tell us a bit about the new Darwin development? There’s a skatepark there right?

Yes, Darwin is an alternative place set in an abandoned military base in Bordeaux, it works as a green economy hub. It’s really cool what they’ve been able to achieve there, it’s almost like a small city within the city. Its rising popularity gave it the rank of second most visited place in Bordeaux. My good friend and ex-pro skater Seb Daurel runs an indoor skatepark at Darwin. He designed most of the obstacles there and constantly changes the set-up of the park. He also built a DIY spot, a bowl, and a vert ramp. I’ve been skating with Seb since I was a little kid and he’s been a big inspiration for many Bordeaux skaters, always doing his thing the way he wants to do it, and always being the funniest.

When I interviewed Rune Glifberg he spoke about skateboarding bringing tourist money to areas, something I’d not really considered before. Is this something you’re using when proposing skate-friendly public spaces to the council?

Skate tourism is definitely a thing that cities need to start integrating now. In Bordeaux we’ve got crews of skaters from all over the world coming frequently to skate the city because they’ve seen videos from here. Skate tourism in Paris has been popping up like crazy too. It’s an argument we’ve been bringing up when talking to councillors, highlighting the beneficial aspects of skateboarding; and explaining that having a skate friendly policy is definitely something that will attract more people to the city.

What is your ideal vision for skateboarding in Bordeaux?

Bordeaux is currently expanding a lot, my dream for the city is that it becomes more and more an active place – easy to get around, a place where you can play outside, where you can freely express yourself and where everybody respects the needs and passions of others. 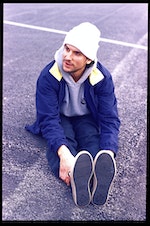 We spoke to Atita Verghese about the Indian skateboarding scene, her work with Girl Skate India, individuality and empowerment...

Pushing Boarders: We Need To Talk About Skateboarding

An interview with the organisers of Pushing Boarders - the world's first academic skateboarding conference.

Pushing Boarders: We Need To Talk About Skateboarding

A little bonus Street League silliness for you, asking Tiago Lemos stupid questions about his experience of the weekend in London.