We spoke to Ryan Lay about Skate After School, a program teaching children from disadvantaged backgrounds how to skateboard. Learn about its beginnings, Ryan’s view on skateboardings usefulness as a tool for social change, how to start your own and more.

When did Skate After School start and why did you guys decide to get it going?

Skate After School more or less started in 2012/2013 as a community project donating boards to local community centers. We were all kind of lacking some sense of fulfilment and were looking to do something positive in our community – being skateboarders, this just seemed like the natural thing to do. We quickly expanded into a local elementary school and from there started doing consistent after school programming.

How easy was it to get the program going? Getting a venue, boards, ramps etc together. Is there any local government funding available for initiatives such as this?

The program started really small – just collecting old stuff from friends and through the skateshop. Social media definitely helped spread the word and also served as a great transparency tool so people could see pretty immediately where their donations were going/the impact they were making. We went through a venture incubator (think short business school) to help us figure out the logistics of running a NPO (non-profit organisation) and how to get our program funded. That was super helpful and we got a pretty big grant at the end of it. Now, we get a mix of funding from private foundations, personal donations and federal grants through the schools. 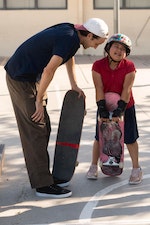 How many people were involved at the beginning compared to now?

Initially, there were three of us, and now we have a team of probably 25-30 volunteers as well as a board of directors.

“We exclusively work with Title 1, or low-income, elementary schools, so our kids are almost exclusively from lower socio-economic backgrounds”

Our target demographic is 2nd-6th grade, with some variance, with a pretty even gender split. We exclusively work with Title 1, or low-income, elementary schools, so our kids are almost exclusively from lower socio-economic backgrounds. In addition to this, a few of our schools are home to sizeable refugee populations, so we’ve really got a multicultural student base.

Are there any kids that have really impressed you with their ability? I know you had that clip in your ALBUM section of one of the kids from the program.

Yeah – our aim was never to operate as a skate school or breed the next generation of skaters, but to give them some mentorship through a fun and engaging activity in the hours after school. That being said, we’ve definitely had a handful of kids really take to skating and immerse themselves in the culture, which has been totally rad to see. Isaac from my Etnies part was one of those kids – we were there when he first stepped on a board, it’s been rad to see him grow into his style these last few years.

What, besides the physical act of skateboarding, does the program seek to teach the kids?

We have a core value curriculum, GRIP, which stands for Generosity, Respect, Innovation and Persistence. Our whole mentorship component is based around these values and we use stickers to create opportunities for talking about them.

Are you familiar with Bryggeriet skate high school in Malmo, Sweden? Do you think a school like that could exist in America?

I’m not sure how Bryggeriet functions, but I would say that we’re probably not too far off that with the Olympics coming up. We have charter schools that focus on specific extracurriculars like football or music so I don’t see why that wouldn’t be a possibility, but that’s not really our mission.

“skating has a lot of reactionary tendencies baked into it, but I also think if you can use it as a tool to build community… it can be a means for positive social change”

We’ve heard of skateboarding being linked to gentrification, do you think it’s important for skateboarding to give back to the communities it exists in?

I’ve not read any of that research, but I will say I’ve witnessed first-hand the opportunities skateboarding can create in struggling neighbourhoods.

Do you see skateboarding as a means through which to achieve positive social change?

I go back and forth on this because I think skating has a lot of reactionary tendencies baked into it, but I also think if you can use it as a tool to build community and create an inclusive space for people, then absolutely yes.

What advice would you give to skaters out there wanting to create a similar program in their local communities?

Just get started, build inroads with people in your community and you’ll figure out the rest along the way. Honestly, we had no prior knowledge starting this and people were just more than happy to help because they trusted we had good intentions.

What’s the best part about being involved in a program such as this? Any favourite memories?

Honestly, it’s hard to hone in on specifics. The best part is that we’ve built a viable community institution that’s had a positive impact on a ton of people – skateshops, parents, teachers, administrators, volunteers and most importantly, the students. I think we live in an incredibly isolating and atomized time and I’m happy we’ve been able to make a contribution to combatting that, however small it may be.

Would you like to see the program, or a similar one, extended across the country?

We’d love to expand and have had loads of people hit us up about it, but logistically it’s a little overwhelming so we need a few years to get there.

What can people do to support Skate After School, whether financially or otherwise?

This summer, we teamed up with camera giants Canon, to offer two lucky winners the chance of winning two incredible prize bundles.