In an industry where even the most talented of individuals can find themselves without support for one reason or another, it’s nice to see someone find a spot they’re happy with. That would appear to be the case for Alien Workshop ripper Sammy Montano and his new home on the Globe team. Sammy’s welcome clip featured some of his best footage to date, which is always a good start. We caught up with Sammy to find out more about the switch, the Sml. Wheels SkatePal connection and more…

How come the move over to Globe?

It just made sense to me, it felt organic. I already skate with those guys so it felt like the right thing for me to do.

What was your shoe sponsor situation before, you were getting shoes from Converse?

It was cool, those dudes are all rad. I’d hang out with Aaron Herrington and everyone every time they were in LA. I’ve got nothing but love for those dudes.

How difficult is it to get a spot on the full team of a company like that? I guess there’s a lot of competition, less chance of trips etc?

It’s hard almost impossible (laughs)… I don’t know? The Globe dudes ended up swooping me and I couldn’t be happier.

“Mark Appleyard is the man, he’s super fun to skate with and all around dope dude!” 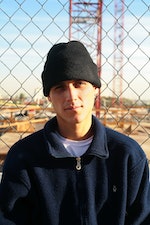 You were just out in Portugal with the Globe team, how was that?

I loved Portugal it was epic, good wine and food.

How is it skating with legends like Mark Appleyard?

I’d been skating with the Globe guys a lot of the time, that’s why it only felt right to join. Mark is the man, he’s super fun to skate with and all around dope dude! Mark is a legend.

Did you have any say in the design of the LA II shoe?

No say on that shoe, but it’s an amazing shoe and enjoy skating them. There’s been talks of a colorway or two in 2018 so I’ll keep my fingers crossed.

You were involved in the Sml. x SkatePal collab, do you have any plans to visit Palestine?

Yeah we went to London to film some stuff for the collab wheel. We met up with Chris Jones and he showed us around and filmed a cool edit. I would love to go to Palestine and visit! There’s been talks of going back next October either with Sml. or Globe. Hopefully we can make that happen! I’m honored they invited us, those SkatePal dudes are cool and got a good thing going on.

Can you talk about your art? I’ve read before you’re into drawing and have been able to sell some of them?

Yeah I mean I always loved art, now I just doodle more and yes I sold a few and not for much. Not that it matters, I just wanna keep the art going! (laughs)

Hopefully some Globe and Alien trips, and we’ve always got our annual Sml. trip to Youness’ house in Belgium. Just keep the good times rolling!

Sammy Montano has joined the Globe family and released some of his best footage to date. Hit play and check out Sammy's welcome clip

We spoke to Milan's King of Pop to find out about his beginnings in skateboarding, the secret to big pop, traveling & more...