It’s funny how important a skater’s “image” is for his career. It’s almost like nowadays you need to fit into one of the “cool” categories to be considered relevant, but what category does Flo fall into? He’s not exactly a jazzy power sliding night skater, he’s definitely not a hesh tranny skater or a baker/hammer guy. You wouldn’t consider him to be a “super-tech” guy either, his skating a bit too varied for that. He could almost be an “energy drink superkid” but he reps CocaCola too hard, and his trick selection is slightly too tasteful. What the hell is he then? Or rather who is he?

There’s a reason why you probably don’t know much about his personality: he simply doesn’t want to share it with you. It may sound strange, but then again, when you think of it, why should he? He’s a skater, he’s not trying to get kids to hug him, he’s trying to get them pick up their skateboards and hit the streets. You may not catch him smiling at every demo or kissing your favorite American pro’s arse (no matter how good it would be for his career) but at least he’s genuine, no gimmicks. That being said, if you want to make it in the skate game, you have to play by it’s rules, so here’s an interview with one of my friends who won’t pretend to be yours just because it would be good for his image.

Hi Flo, how are you? What have you been up to lately? I heard you guys were on deadline for the new Cliché video, how is that going?

I’m fine and you? Yeah, the deadline is really close, we are supposed to stop filming at the end of February. Cliché are taking us on one last trip this month and then that’s it. It’s going really well, everybody is on it. I’ve been trying to film one last thing in Lyon but the weather has been so shit that I haven’t been able to try properly.

Who do you think has the best stuff so far?

I know Sammy and Daniel have filmed some really sick clips. I haven’t seen everyone’s footage though, but I’m sure Joey and Lucas have got good footage, they are both pretty productive. I’ve also been skating Lyon with Adrien quite a lot recently, and I’ve witnessed some crazy hammers, he’s been killing it.

Yeah I heard about Adrien’s gnarly stuff on the Rowley hubba… It sounds like one of the flows is going to get the last part! That would be a first…Do you think one of them is going to get on the proper team after the video drops? That’s how it happened with you right?

Yeah definitely, probably even more than one of them to be honest; the stuff they’ve got so far is mind-blowing. I guess the team will have to decide who they want to have properly on. That’s how it happened for me: I went on a few trips with them, filmed for “Clé,” and when the video came out they put me on.

So when was that, 4 or 5 years ago? Since then you have been trying to live from skateboarding, how is that going? Can ams make enough money to live comfortably in Europe without being sponsored by an energy drink company?

It’s going fine, I think you can definitely make enough money to get by in Europe. The only thing is I don’t think it’s enough to keep you going once your “career” is over. You know that after skating you will inevitably have to get a proper job, but right now, I can’t complain. 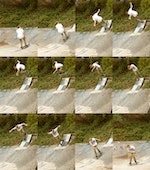 Leaving the financial aspect of it aside, are you still enjoying it? Because I remember there was a point last summer when you kept losing your shit. More than once I heard you say: “I’m sick of this, I can’t stand filming and shooting photos anymore, it’s driving me nuts, I just want to skate Hotel De Ville with my friends…”

Hahaha, no right now things are going well… But it’s true that at one point I was kind of over it. I injured my leg last year and for 6 months after that I just felt like I was struggling to do anything. It took me a while to feel confortable on my board again, and when you are supposed to be filming a part or when you are on a trip and you suck at skateboarding it can really get to you, you feel useless. I found myself wishing I could just have mellow sessions with my friends instead of constantly being on missions. But then you start getting better again, your confidence comes back and you enjoy it in the same way as you used to.

Don’t you think it could also be linked to the fact that it’s your job to skate everyday, you think about skateboarding all day and basically only hang out with skaters?

Yeah, it’s not good to be trapped inside a routine like that… But the fact that it’s a routine you chose to get yourself into, means that you have the power to get yourself out of it by doing other things that have nothing to do with skateboarding. That’s exactly what I’ve been trying to do recently.

I’ve been drawing quite a lot. Whenever I’m not skating I try and go to driving school… I’ve also been trying to learn some new tricks on my kendama.

It’s funny I knew you would enjoy playing with that that thing (it was a birthday present from me and another friend). Seeing you learn tricks with it reminds me at lot of the way you skate. It’s really repetitive and takes the same kind of patience and dedication, except you probably don’t look as ridiculous on your board. Then again, can you tell people about the flat ground  “revisions” you do over the summer at Hotel de Ville? I find the concept quite amusing…

Hahaha, sometimes I play this little game where I try and redo every single trick I can do: kicklip, switch flip, nollie, flip, fackie flip etc… Then I would do the same thing with heelflips, bigspins and so on. I guess it kind of trains you up for playing SKATE haha… It reminds me of when I would session my bench on my own, in Gap ( little town in the south of France where he grew up skating).

What’s the story behind this bench?

Basically, when I was younger I stole a Bench from a school with a few friends and took it to an inner courtyard where my mother worked. It was ten minutes from my house and I ended up skating it for hours every evening after school.

I know you spend hours on HellaClips everyday, do you think skateboarding is benefiting from this constant flow of skate clips, or do you miss the good old VHS days?

I hate the Internet’s influence on skateboarding and one of the reasons why I hate it so much is because there is no escaping it. Nowadays, I feel like you instantly forget everything about a part right after watching it. Videos don’t have the same charm as they use to. A few years ago, you’d buy a video and watch it over and over again for 6 months, and still love it. It’s not the same anymore, you end up watching so much useless crap that whenever you actually do come across something sick it just fades in with the hundred other clips you just watched.

I know what you mean, it desensitises you. What effect do you think it has on the industry?

It’s definitely not helping the mags (last week Skateboarder announced that they would no longer print their magazine) or videos put out by legit companies. Instead it’s making it mainstream and opening it up to more people. In theory that could be good for the industry, but the problem is that the core brands aren’t the ones who are really going to profit from this expansion.

All the people who never had anything to do with skateboarding in the past, but suddenly decided to latch onto it because they realized there was money to be made.

What have you got lined up after this Cliché video is done?

DVS want to put out a video, but I don’t know very much about that yet, so I can’t tell you if it’ll be a short promo or a full-length video. Bist  (the guy who filmed this edit) and I also want to make a VX video with the whole crew from Lyon, so I guess I’ll just keep filming and decide where I want my footage to go later.

I forgot you were back on DVS, what happened with Supra?

Well things didn’t work out with Supra, I went on a trip with them and I guess it wasn’t really a good fit so they kicked me off as soon as we got back. At the same time Shier became the new DVS team manager so we discussed a few things and he asked me to come back. I’m stoked, I already know everyone on the team and things have always gone well with them. Cheers Shier!

What Europeans should we look out for this year?

Howard Cooke is going to have footage in new Heroin video!

Howard Cooke is going to have footage in new Heroin video!