Welcome to the Dannie Carlsen interview! Off the back of Dannie receiving a colourway from his shoe sponsor Globe, the first Dane since Rune Glifberg to get a shoe with his name on (we think…). Read on for a little glimpse into Dannie’s world…

How’s the Danish winter been treating you?

It’s been okay, at the start of the winter I broke three of my toes so it hasn’t really bothered me since I had to heal up. I guess i was kind of lucky in a way…

How did the colourway come about, must have been a nice surprise?

To be honest I don’t know how it came about, but I was stoked and I’m still stoked!

What was it like growing up CPH & the Wonderland bowl?

I didn’t really start skating Wonderland until i was about 17 or so. From around 14 to 17, CPH Skatepark was the main place for me. When I hit 17 I realised how awesome the ramp at Wonderland was plus it was, and still is, really close to where I live so I took advantage of that.

Where in Copenhagen did you grow up?

I grew up in Amager, it’s right next to Christiania

Is it true that when you were a kid you’d do a hundred blunt kick flips back to back to clear your head?

No that was actually Alexander Risvad who did around 500 blunt fakies or something in a row, back in the CPH Skate Park. I wanted to see how many blunt flips I could do in a row and made it to 50…

Did you grow up around Nicky Guerrero, how influential was that in terms of your skateboarding if so?

I didn’t really grow up around Nicky, I didn’t really get to know him until I was around 17, I knew a little about him. The two skaters I was looking up to when I was young were Chris Larson and Marius Martaeng who I thought were sick and amazing skaters. 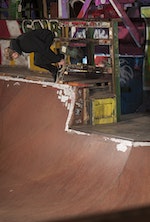 Who do you enjoy watching skate Wonderland?

All the locals – the Red Hair Kid, Thomas Roupe and Bjørn Lillesøe.

Will you miss having the best skate comp in the world in your home city this summer?

Yes, I am going miss that one a bit. Unfortunately most of the time when it was here I’d have to leave for the UK for a contest the day after the comp started, and usually was back home when it was done. Of course there were sometimes where I would get back home in time to enjoy the festivities. When I was here it was great fun.

Where’s the most interesting place skateboarding has taken you? I remember seeing some footage of an Alis trip to Japan where you were skating this old water park…

There are many but Japan was certainly one of them. The old water park incident is true yeah. Some crazy stuff happened! Bjoern almost fell out of the pipe with a 30 meter drop the other side, the police came and we had to run but couldn’t really escape as we were stuck on an island and the cops were able to cross the bridge where we were. When the police found us Albert (from Alis) started telling them stories about this deer which we were just following and how it randomly led us to the water park, but they didn’t believe the story! Lucky for us Jonas Bunger (Ginger) got heat stroke and had to be rushed to help, so the police drove Ginger to a gas station and gave him ice cream and let us leave with a warning. Pretty lucky really!

How did the Carve Wicked move come about? You’ve known those guys for a while?

I’ve known them for quite a while… meeting them around Boardmasters. We had some crazy fun times. When Sam told me they were going to make Carve Wicked boards I told them that I would like to skate for them and they accepted. I can’t imagine a crazier road trip!

Have you ever done bubbling (pissing in your own mouth)? I know those Welsh guys are fond of it…

Never heard of it, but I did hear that those Welsh guys were into some nasty stuff…

Skating, stacking up on some clips and traveling around for some contests.

We caught up with Matt Price to talk about his new magazine, skateboard photography and more. Enjoy!

Hit play to watch some new Dannie footage and check out his shoe...

Talking positives aspect of skating, women's representation in the industry, sobriety in the Baker team & more