So Javi, how does a project like this start?

Well, this whole movie project started through a re-encounter with Thomas like three years ago. I met Thomas in Algorta, circa 1993. He was shooting photos for Transworld then and was visiting Spain for an article. I was a young skate junkie and I just met Fernando Elvira a few months ago at the skatepark De Las Arenas – who was the editor of Tres60 mag back then. So it was though Fernando that I met Thomas, we all went skating and shot some photos for two or three days only… but there was already a good connection despite my really bad English and Thomas’s really bad Spanish. It’s funny, because those photos came out in Transworld, and that’s how I got my first sponsor, a distributor from Madrid. Anyways, after that 16 or 17 years passed by with barely any correspondence in between, until three years ago. So, years later we met again in his house in California to shape out the idea… then the idea of the dream came about. Focusing the movie towards a dream we started to write, share links of movies, come up with possible ideas of different angles and also figuring out the people whom we wanted to work with.

That’s Thomas’s title – he wanted something in Spanish. The movie starts when I go to sleep with my (supposed) girlfriend. That’s where I start my dream alone and later on meet with Madars (Apse). Then a trip between dream and reality starts, where we skate in woods, volcanos and there are even scenes underwater too. And at the same time we skate more conventional skate spots too, but always looking for visually powerful places.

Seems like a lot of work but you guys always kept with a small crew. Did you just focus on the acting or did you do some other stuff too?

Yeah, I’ve actually done a bit of everything: I helped Thomas to shape the original idea, gather the working team with Madars, Fred Mortagne, yourself (Sem Rubio), Antton Miettinen and Brian Gaberman (who I didn’t know before the movie), convince Quicksilver to finance the production, gather ‘Chiwoks’ to record the soundtrack, organise all the trips, find the different locations. I also helped with the creativity.

Did you act before? Or did you feel like acting at all?

I did some acting in theatre when I was 13 or 14, but really little. Anyways, I didn’t have to get in the role of a character; besides the first images when I go to sleep, the rest was just skating!

In any case, did you find it hard?

It was a bit weird because that’s something I’ve never done before, going to bed with a friend of mine in front of all those cameras and lights. But the working team was really small and we are all good friends, so we had good laughs. Skating, is skating… that’s what I’ve done for many years and what I like to do, the only complication is to land your tricks without slamming too much… nothing new!

What major obstacles do a project like this go through?

Well, economically it is at the beginning when you have to work hard, find someone who understands you, appreciate you and want to finance the project. Thomas is known and respected in the world of art, surf, skate and music, he’s been doing it for many years, with endless works to support his reputation. So when I took the project to Quiksilver, despite the times of budget problems all the brands were involved in, they didn’t think twice about it. Then, technically and at a production level, we went through endless difficulties that you try to overcome as best as you can. Maybe the biggest difference between this project and a skate video project is the fact that we were filming in 16mm, and that changes a lot. On every trip you take an extra XXL bag full of film that you can’t check in and you can’t take through X-Rays; so you have to deal with the next cop in front of you and make him understand what it is, that it’s not going to explode or hurt anyone, that you have the right of a manual revision. Then every roll is expensive, you can’t try a trick for hours, you have to go for it; you can’t see it to check if it’s good or not. Also the music, the fact of recording the soundtrack with a band in a studio was something new, at least for me. I called my old friends whom I had grown up skating with and I knew how they started playing music so I told them about the project and they went for it straight away. We went to France, where Quiksilver has a recording studio and there they improvised seeing the film for ten days, seeing images and playing on top of them. The result was hours and hours of improvised music that Thomas had to cut and fit later on. But actually this was probably the most incredible ten days, pure improvisation.

How did you find the right places?

I had some places in mind I was sure I wanted to go, places I had already been before and knew they would work very well with what we had written. So, based on these places, I chose the destination and then I explained to the locals what we were doing and they told us about other spots that could fit. Then you have the improvisation factor; using what you find on the way, you have a bit of that too!

For those who have not seen the movie, what do you think it has that will catch their eyes?

It’s a movie about skateboarding quite unprecedented: the 16mm format, “Chiwoks” creating the music based on the images, the unusualness of the locations, at least most of them, the dynamism Thomas and Fred have given to the storyline, the freshness of Madars on a board… I think overall it’s a powerful visual experience. 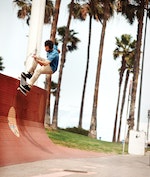 Now before you head over to the Um Yeah Arts website to order DVD/book, enjoy this web gallery featuring all the Cuatro Suenoas Pequenos photos we published in issue 119: