Copenhagen demonstrated in no uncertain terms that a little rain couldn’t dampen the festivities, as the CPH Open went full steam ahead despite the rain that threw down for most of the day. The washed out scheduled lunchtime ledge action quickly turned into rammed session at the Wonderland bowl in Christiania. Tough to get in, it proved even harder to get out, as the crowds surged to witness the transition madness of the impromptu sweatbox.

Catch up with days 1 and 2 of the Copenhagen open.

Breakout missions were taking place in other parts of town as the city showed why it’s one of the best places to skate regardless of weather. Secret spots and well known parks such as the X-Hall bowl were getting decent workouts and being destroyed by GT and crew amongst others.

For those looking to use the break in the comp to loosen up a bit the Champagne River Cruise and Party Bus transported skaters and crew under canopy fuelled by seemingly inexhaustible cases off special reserve.

With the rain retreating late afternoon, the Triangle DIY spot looked like a goer and against all odds dried up just in time for a comp, though not before it was turned upside down by Sepo Walker and TJ Rogers who skated it better in the wet than most mortals can do in the dry. For anyone who’s not seen it, the Triangle takes it’s name from it’s shape and has a bunch of curbs, ledges, hips and bumps that can be skated all the way round. Qualified skaters were given 3 x 2 laps to put lines together with top winners making the cut for Saturday finals. Franky Villani go the crowed fired up with smiles and a diverse bag of silky oddness, Vincent Milou was on fire but Luan made the whole thing look like his local spot with a consistency that’s beyond comprehension. 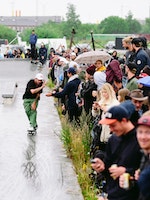 The CPH Open finals was a day that will go down in the history books as one of the most packed Copenhagen skateboarding has ever seen. With a big crowd comes a great atmosphere and with the sun out and the party in full Saturday mode, everyone headed to the first stop of the day by the Planetariet where a flat bar and picnic bench got laid out in a line to find the last skaters who would make it into the finals.

Louie Lopez, Matt Berger and Felipe Gustavo all made the grade while others took the opportunity to find the best vantage point by hiring inflatables and watching from the lake.

Moving on just a few metres was a straight up 10 step cash for tricks assault through a sea of people standing and hanging on to whatever they could find. Bangers came in the shape of Aurelien’s Hardflip, Midler’s front 3 and Jamie Foy’s BS heelflip.

From the steps the race was on for everyone to get to the finals at the Copenhagen skatepark with entry queues destined to snake right up the road.

‘Side mission on the way’ goes to Jamie Foy, Zion, Paul Hart and Alex Midler on a shocker of a bridge rail – check @copenhagenopen to be impressed.

The newly refurbished park complete with obligatory heart sunglasses was feeling the heat from the off, an incredible line up of skaters that was a treat to watch both live online and in the park.

With such an impressive start list it was always going to be a hard call but the day, if not the week, belonged to Ishod Wair showing why he’s a SOTY by cruising with absolute effortless board control on every surface he touched in Copenhagen. Luan Oliveira and Vincent Milou took the next two spots but the party was fully in Ishod’s honour.

Barrel jump up next and rumours that it’s being considered as an additional Olympic discipline are unfounded, if it was, Blake Johnson would be in with a shout. The Death Race is also not on the cards but it would be a sure fire ratings winner. Top speeds of 29mph and glory for days to anyone with super push and a good barge, Mason Silva had the elbows to take the win

The comp was closed down with the best trick, this year a bump to bar over a smoking mystery pit made even better/challenging by the sheer amount of gold confetti cannons being let off. With crowds that made even going to the bar a challenge, major props to those that skated and especially Jaakko Ojanen who secured top honours. 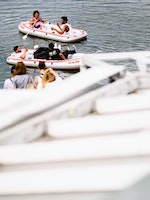 Keeping it irie in CPH.

A collaboration between SkatePal and SkateQilya, two non-profit organisations empowering children in Palestine through skateboarding.