UK-based Isle Skateboards was started in March 2013 by former Blueprint Skateboards rider Paul Shier and skater/filmmaker Nick Jensen, and is distributed in the UK by We Are Rock Solid. The company’s distinctive logo is the work of ex-Slam City Skates designer Tim Fowler.

As well as Shier and Jensen, the Isle team features pro Sylvain Tognelli from France, Californian Jon Nguyen, Bridgend’s Chris Jones and Tom Knox from London. Many of the Isle riders, plus skaters such as Luka Pinto, Kevin Lowry, Arthur Derrien and Daniel Clarke, featured in Jacob Harris’s largely London-based VX video Eleventh Hour, with Knox’s part being one of the skateboarding highlights of 2013.

It was a busy first year for Isle, with boards becoming available to buy in skate shops around the UK in June – the debut Studio #1 and Push Pull #1 ranges featured signature boards from Jensen, Shier and Tognelli. There were also excursions to Valencia, Lyon and Berlin, and, later in the year, the first installment in the company’s Artists Series of decks, created by Lee Marshall.

During the year, Isle also released a series of films on dazeddigital.com – Together | Apart stripped back the workings of a studio shoot, Light | Dark was made over two evenings and featured the Isle team skating after dark, Stop | Start used Super 8 film to convey the actions of Chris Jones’s skateboarding as well as his recent relocation from his hometown to London, while Left | Right showed Knox and Jensen skating in synchronicity. 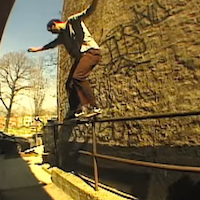 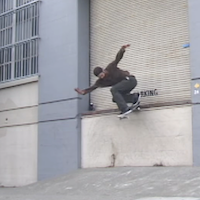 Jon Nguyen's section from the TransWorld video 'Substance'. The part that turned him pro for Isle.
6 years ago | by Jan Grey Blip - an ongoing project of commissioned or collaborative clips by Dan Magee and Company.
6 years ago | by Matt Broadley