Canadian skate crew Dimestore have made a name for themselves over the past few years with a series of sick skate videos aiming to put their home city of Montreal on the skate map. They also produce a line of clothing, featuring hoodies, T-shirts, rugby shirts, a windshirt and a cap, overseen by photographer and blogger Vincent Tsang.

Their first video appearance was in 2010’s The Dimestore Video, which introduced the world to the company’s never-take-itself-too-seriously approach. Filmed by Asselin and Phil Lavoie, it was backed by an unpredictable soundtrack featuring artists like Enigma, Frank Zappa, Mantronix, The Doors and Ol’ Dirty Bastard. This was followed in 2011 by the 21 minute The Deuce, starring McGraw, Asselin, Rivard, Riedl, Balek and Lapierre and with a soundtrack featuring De La Soul, The Mentors, Kool and the Gang and UGK.

The third Dimestore release was Lavoie’s Dime Turd Season from 2013, where once again the comical dimension – this time featuring buses, ripped trousers and the X-Files – was at least as entertaining as the skating. Just like in their previous videos, it featured the grimy streets of Montreal, recurring images and a seriously good line-up of skaters including the usual Dimestore crew plus names such as Cephas Benson, Glencoe Hogle and Mitch Barette.

Another exceptional skate even looming on the horizon: The Dime glory Challenge in Montreal.
8 years ago | by Arthur Derrien 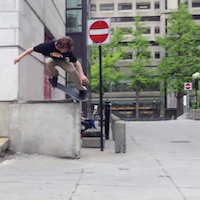 10 years ago | by Arthur Derrien 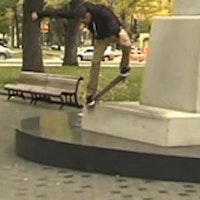 An excuse to rewatch the new Dimestore video.
10 years ago | by Arthur Derrien No matter how relentlessly the internet churns out skate clips, finding ones that you are truly stoked on isn’t getting any easier. It almost feels like most of the new skaters...
10 years ago | by Arthur Derrien The Grimy streets of Montreal with it's crackheads and street fights and ridiculous skateboarding.
10 years ago | by Arthur Derrien Pretentious Self-Fellatio in the Big Apple

Incredible.
10 years ago | by Arthur Derrien Such a good trick selection!